The History Of The Santa Monica Ferris Wheel 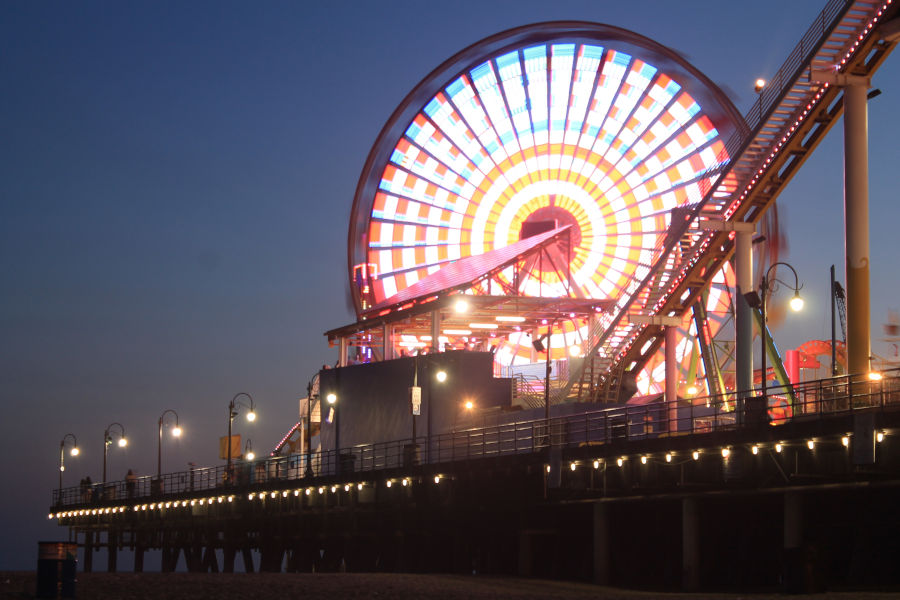 California is home to many amazing tourist attractions and fun things to do, but there is one iconic item that always stands out, and that is the Santa Monica Ferris Wheel. This wheel has a rich history that began in 1987 when it was determined that the Santa Monica Pier needed an amusement park. By 1996 the park finally opened, and the first Ferris Wheel was ready to delight anyone who wanted to ride it. The rest is history. Speaking of which, let’s dive into some historical facts about this awe-inspiring Ferris Wheel.

How The Santa Monica Ferris Wheel Came To Be

The Santa Monica Pier was built in 1909; however, it wasn’t the amazing place that you know it to be today. It was used as a loading dock for moving waste into the ocean. Yuck! By the time 1916 came rolling around legendary carousel-builder, Charles Looff decided that the pier had far more potential and decided to build the La Monica Ballroom.

Fast forward to 1987 when the pier underwent some much-needed repairs and began construction for an amusement park. By 1996, Pacific Park was open for business, and so was the world’s first and only solar-powered Ferris Wheel! This wheel cost a whopping $1.5 million.

It’s kind of crazy to think that the original solar-powered Ferris Wheel would need to be replaced so soon, but the council felt that Pacific Park needed a bit of a makeover. The original Ferris Wheel was eco-friendly, but the new version was built with energy-saving LED light bulbs that also run off solar power.

Not only are the new bulbs earth-friendly, all 160,000 of them, but they also look brilliant during a nighttime Ferris Wheel ride. Another fun fact about the new Santa Monica Ferris Wheel is that it was constructed with the original solar panels of the first one. These panels generate up to 71,000-kilowatt-hours of photo-voltaic power.

What Happened To The Original Ferris Wheel?

You may be thinking that the old Ferris Wheel is sitting in a landfill somewhere, but that couldn’t be further from the truth. Actually, the dear old Ferris wheel has a brand-new home in Oklahoma City. If you can believe it, the Ferris Wheel was auctioned off on eBay to a man named Grant Humphreys for a sum of $134,400.

It might seem like a ton of money to pay for an amusement park ride, but the original asking price for the wheel was $800k. We’d say Mr. Humphreys got a killer deal!

Be Sure To Swing By Dean’s Ocean Front Café

After you have spent some time around the Pier, and have checked out the Ferris Wheel, come by Big Dean’s and check out the best grub in town. We’ve got burgers, fries, and more, and cold drinks to wash them down with. There is so much Santa Monica has to offer, be sure to check out our blog for all kinds of amazing things about Santa Monica! Don’t forget to follow us on Facebook & Instagram!