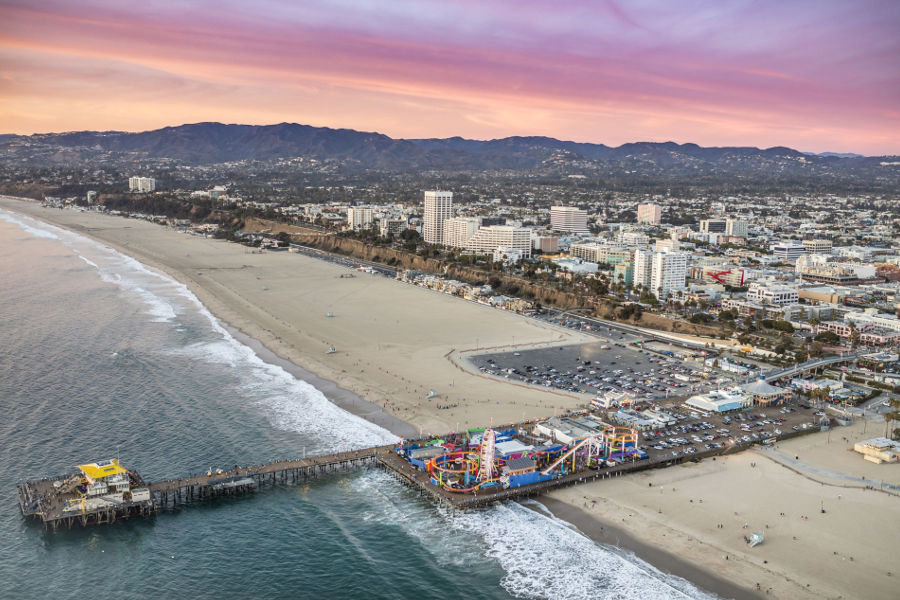 Did you know that Santa Monica is home to over 100 designated city landmarks? When you are wanting to do something fun and educational with your family, visiting and learning about our many historic landmarks is an outing that helps you dive into the culture of the beautiful city of Santa Monica.

Spots like the Looff Hippodrome, the Georgian Hotel, and Palisades Park have such a rich history that can easily be looked over. So, the next time you are ready to learn about the buildings and places that make Santa Monica what it is today, here are our top picks for must-see historic landmarks.

The Merle Norman House was home to the famous cosmetics entrepreneur, Merle Norman, for 20 years, who began her business in her kitchen. It is a beautiful Mediterranean Revival-style home, setting itself apart from the nearby houses, which are typically Victorian and Craftsman-style. Merle is famous for her “3 Steps” beauty treatment, as well as her innovative marketing strategies. She was known for her free demonstrations and word-of-mouth product promotions during the hard times of the Great Depression.

The Mayfair Music Hall, also known as the Majestic Theatre, is Downtown Santa Monica’s first theater, founded by Charles A. Tegner, a prominent businessman, and J. Euclid Miles, who is known for his donated Miles Playhouse landmark. It was known to be a lavish and high-class place of entertainment. It underwent a remodel in 1929, featuring a gorgeous Churrigueresque design, which includes sculptural floral ornaments, vertical shafts, and decorative wrought iron balconettes. It became the Mayfair Music Hall in 1973 – a live entertainment and supper club hall.

Even though this historical gem has recently closed, its owner is interested in making it a museum. It was designated as a city landmark in 2007 and was once home to the legendary Zephyr surf shop and the Z-Boys skateboarding team. It was opened by Jeff Ho and Skip Skip Engblom in 1996. The Z-Boys skateboarding team became famous from the film Lords of Dogtown and the documentary Dogtown and Z-Boys.

The Looff Hippodrome is a 103-year old destination that is home to the Pier’s famous merry-go-round. It was built in 1916, during the same time as the Looff Pleasure Pier, which is now known as the Santa Monica Pier. Charles I.D. Looff is the mastermind behind the project, and this was his last work. The first carousel that he built was at Coney Island, and he was a designer of amusement areas in many states across the country. The Looff Hippodrome was the forefront of the Looff Pleasure Pier’s success. The design for the Looff Hippodrome was inspired by Gothic, Medieval, and Russian-style architecture.

The Santa Monica Pier is one of the hottest destinations in Santa Monica with its many activities, restaurants, shops, and things to do and see. It is home to Pacific Park, the famous solar-powered Pacific Ferris Wheel, the Playland Arcade, the Looff Hippodrome, the Twilight on the Pier music festival, and more. Whether you visit during the day or at night, there is always something great going on at the Santa Monica Pier.

When you’re visiting the Pier area with family or friends, be sure to stop by Big Dean’s Ocean Front Café on the boardwalk for delicious food and drinks and an exciting dining experience. You’ll find something for you on our extensive dining menu, including our famous fish and chips, clam chowder, cheeseburgers, chili cheese fries, and more.

Be sure to like us on Facebook to keep in touch with the latest at Big Dean’s!