The Untold History of Santa Monica 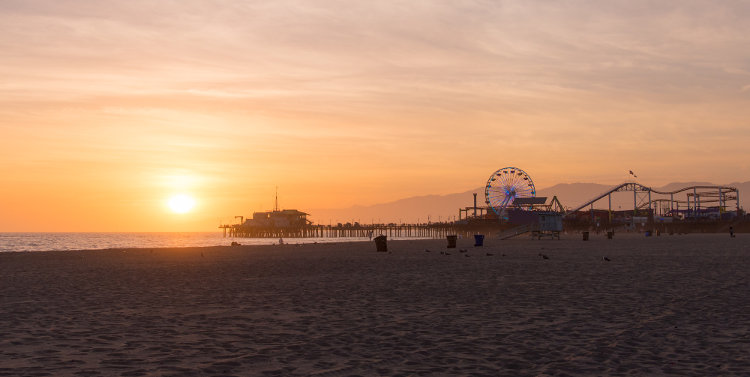 Did you know Santa Monica was named after a saint? Or that multiple tribes of Indians inhabited the area?

Filmmakers originally wanted Santa Monica to be their hub of operations, but why did they leave?

Discover that and so much more as we dive into Santa Monica history.

Long before the glitz, glam, and eccentric beach culture, there was only the Chumash Indians. The tribe was there long before Spanish explorers.

Over 200 years later in 1769, another Spanish explorer, Gaspar de Portola, commanded an expedition through the area of California. During a brief rest period, a group of men from his expedition traveled north.

The small group eventually made it to two sparkling springs. Once refreshed, it was agreed that the area should have a name. The day this occurred just happened to be St. Monica’s day – May 4th.

It is said that the springs reminded them of St. Monica’s tears. They thought there could be no better name for the area than Santa Monica.

Another hundred years after Portola, John P. Jones, a U.S. Senator from Nevada migrated to the area and further developed it. The idea was to create a resort town with Colonel Robert S. Baker who had bought the area.

Jones went on to build a Victorian home overlooking the ocean. He called it Miramar, and it later became a hotel.

Second Street became the site for the first commercial buildings in the late 1800’s. The city of Santa Monica was incorporated in 1886.

With residential areas spreading like wildfire, the area of Ocean Park became part of Santa Monica. Now a more prominent beach city, piers were built to be a popular attraction. At one point in time, Santa Monica had five.

Due to its close connection with Los Angeles, filmmakers flocked here. In fact, the Vitagraph Film Company, among other companies and studios, set up and began filming in town.

Unfortunately, due to the intense, coastal fog, filmmakers had abandoned the area and all fled to L.A. by 1915.

Even with the studios gone, the 20’s were a time of exponential growth. This was due in large part to the establishment of Douglas Aircraft at an abandoned film studio.

Santa Monica continued to be the spot for aircraft history. In 1924, the first around-the-world flight started in the city.

Later, with the opening of Hershey’s Department Store and Criterion Theater, development continued to boom in residential and commercial sectors.

On the beach, prestigious clubs began to open and celebrities built homes north of the pier in what was called the Gold Coast.

Come Be a Part of Santa Monica History

The city continues to grow in fame and wealth. With beautiful beaches and even more beautiful people, Santa Monica is a place worth visiting.

For further reading on Santa Monica history, check out our guide to why you should visit the history museum – then go!

While you’re here, come to Big Dean’s for a burger on the beach. There’s no better way to experience this beautiful city.