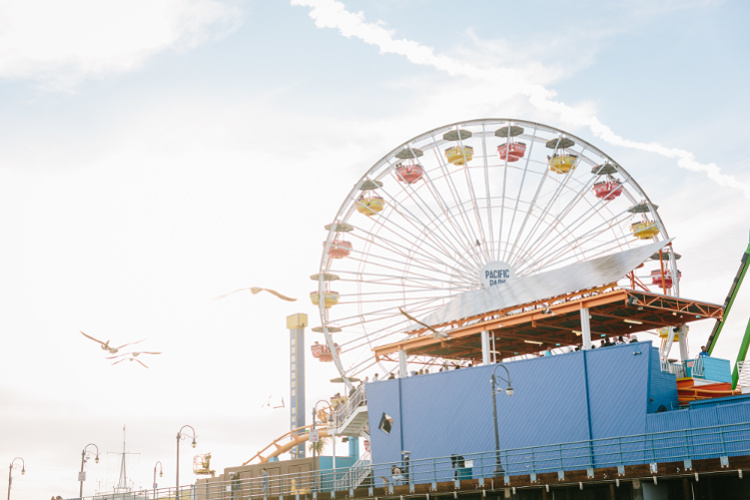 There are roller coasters, haunted houses, bumper cars, and Ferris wheels, but when it comes to amusement park staples, nothing is quite as classic as the carousel.

The ride has a fascinating history, dating back to a game played by Turkish and Arabian horsemen in the 12th century. But did you know that our very own Santa Monica Pier carousel has a rich history all its own?

Here, we’re breaking down the history you may not have known about this local landmark and fun-time favorite.

The carousel was built by Charles I.D. Looff, a famed carousel manufacturer who brought the first successful amusements to Santa Monica’s north beach.

The carousel itself was built a few years later in 1922, featuring 44 hand-carved animals in an endless race to the tune of a calliope.

Sadly, Looff himself never saw the carousel–he died in 1918, and the carousel was built while his family ran the pier in honor of his vision.

These days, a trip to the carousel involves a lot of noise.

Traffic on the street. The sound of a helicopter. But once upon a time, you could hear the band organ all the way in downtown Santa Monica.

But then again, some things haven’t changed at all. Couples hold hands, children wave to their parents, and everyone has the horse they love the most.

Of course, the carousel has had some famous visitors as well.

Once, for a stretch of weeks in the early 60s, a young woman with a long overcoat and dark sunglasses would watch the horses spin for hours. After a while, the carousel operator, Jockey Stevens, approached her and said she looked young enough that she could probably find a good job at the pier.

She swept off her dark wig and glasses, and that was the end of that discussion. The woman was none other than Marilyn Monroe.

Besides visits by the rich and famous, the carousel has appeared in a number of Hollywood movies and TV shows. Its most famous appearance was in the 1973 film The Sting, in which Robert Redford and Paul Newman play two grifters teaming up for the ultimate con.

While their characters conned their way through the carousel, Redford and Newman fell in love with the place in real life and advocated with a group of preservationists when City Hall threatened to knock down the carousel.

They succeeded–the Hippodrome and carousel inside it were declared a National Historic Landmark. A fitting designation, as the carousel is a museum piece in its own right, a relic from the golden age of carousels.

More Fun, Games, And Cool History At The Pier

Of course, what’s the fun in reading about the Santa Monica Pier carousel? Why not go give it a spin yourself?

And if you’d like to learn more about this city we love so much, click here to read more about the untold history of Santa Monica.

Need a bite to eat after your ride? You’re in good hands. Check out our menu, and come to visit us the next time you visit the pier!